If you're trying to decide whether to have kids it would be helpful to know whether you should expect yourself to be happier childfree or as a parent. The press reports it both ways, passing on the results of conflicting studies. I would like to find a good summary by someone who has read all the relevant research and understands which are the strong studies, but I've not found one. [1] Instead I've tried to read up on this enough that I can have an informed opinion, but there's enough research out there that I could be off. So here's what I've learned, after reading lots of abstracts, the "related work sections" of several papers, and finding two papers that I think do about as well as you can.

The most basic question in any research about happiness is "how do you know how happy people are?". While it's unsatisfying, the best we can do really is just to ask. How you ask matters, however: when parents are primed to think of their kids when asked about their happiness ("How happy are you as a parent?", "Has having kids made you happier?") they tend to say that their kids make them very happy. Some of this is probably a warm glow that comes of thinking of your kids, however, and so by first bringing up this glow and then asking about happiness you get answers that are atypically positive. Plus the social pressure to say you're happy as a parent. Studies that simply ask about happiness and parental status separately, as part of a broad survey, seem much more trustworthy to me because they should avoid this bias.

So what do they ask? I looked at two studies in depth that analyzed existing surveys. Those surveys asked:

GSS: General Social Survey (USA)
"Taken all together, how would you say things are these days?"
LSS: DDB Lifestyle Survey (USA)
"I am very satisfied with the way things are going in my life these days" ("definitely agree, generally agree, moderately agree, moderately, disagree, generally disagree, or definitely disagree").
SOEP: Socio-Economic Panel (Germany)
"How satisfied are you with your life, all things considered?" [2]
BHPS: British Household Panel Survey (UK)
"Have you recently been feeling reasonably happy, all things considered?"

These questions aren't ideal; I'd rather we had some way to directly measure happiness. But given that we don't have that, knowing how likely each choice is to lead to me answering positively to the questions above is still useful.

The second big question is how to deal with confounding factors. Many studies simply gather a sample of parents and non-parents and ask them how happy they are. Parents and non-parents differ in consistent ways, however. Two of the big ones are that parents are more likely to be married and have a lower household income (Herbst and Ifcher 2011). Marriage and money tend to both make people happier, so if you just compare parents to non-parents you're going to be misled in one direction by marriage and in the other by income.

The most robust way to deal with this problem is a randomized controlled trial. Then we can compare the happiness of the people assigned to have children with those assigned not to. I've not found any studies doing this, probably because I can't see anyone agreeing to participate in one. [3] Some sort of natural experiment, like a factory that had a major accident sterilizing a shift's worth of workers, might provide a setting for good data, but even then you'd have to worry about the long-term effects on happiness of involuntary sterilization via industrial disaster.

Which means we're left with studies that look at variation, trying to tease apart causation. The standard way to do that is to look at parents and non-parents self-reported happiness and control for anything you suspect might be interfering. In A Bundle of Joy: Does Parenting Really Make Us Miserable? (2011), Chris Herbst and John Ifcher ran this on two very large US surveys, the General Social Survey (GSS) and DDB Lifestyle Survey (LSS). They compared people living with children under 18 (parents) to everyone else (non-parents), which means they're more measuring the effect on happiness of active parenting, not of having had kids. For example, grandparents would generally be in the 'non-parent' category, even if they're getting substantial happiness from their grandchildren which they wouldn't have if they'd not had kids. Still, the effect just over the 18 years when a child is typically at home is still of interest.

They found that as a whole parents were less happy, but also that they were more likely to be younger, married, lower-income, all of which have substantial effects on happiness. Adding controls, they found that the negative effect of parental status on happiness goes away if you control for age, gender, and race, and it becomes positive if you add income, employment, marital status, and education. Whether it's reasonable to use income as a control, however, is not clear. They found income was substantially lower among parents (GSS: $30,767 vs $38,959; LSS: $27,973 vs $39,445) but it's hard to say whether this is because richer people are less likely to have kids, stay-at-home parents give lower household income numbers, or something else. There's also the question of whether there's anything non-demographic that might affect both happiness and the desire to have children.

Mikko Myrskyla and Rachel Margolis try to get around this in Happiness: Before and After the Kids (2012) by looking at individuals over a time window around having children. They used two surveys, one German (SOEP) and one British (BHPS) that tracked people for an average of ~11 years, looking at self-reported happiness among other things. They limited their interpretation of the surveys to people who had no children at the beginning and then had their first child during the study period, which was 4,513 people for the SOEP and 2,689 people for the BHPS. They found that people tended to see a temporary increase in happiness in the years before the birth of a child, but that afterwards they tend to drop back to their long-term average. They made charts of this, broken down by several factors:

By age at birth of child 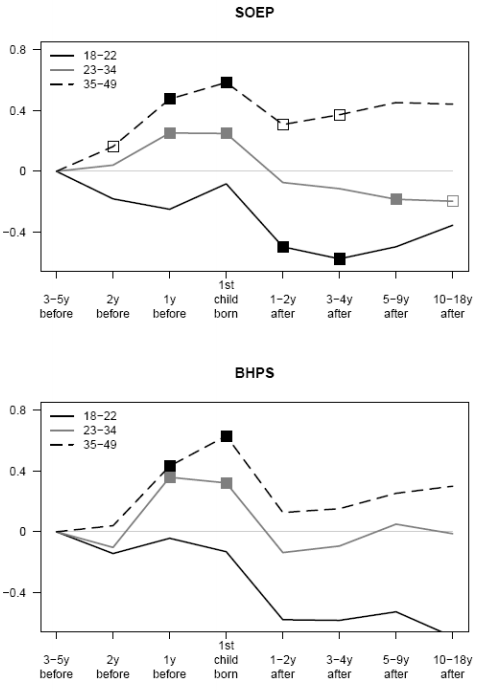 By age at birth of child and gender, German (SOEP) only 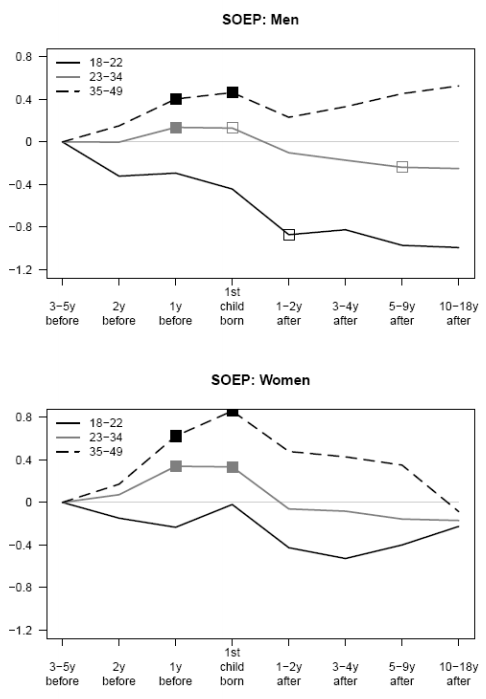 By gender, with controls, German (SOEP) only 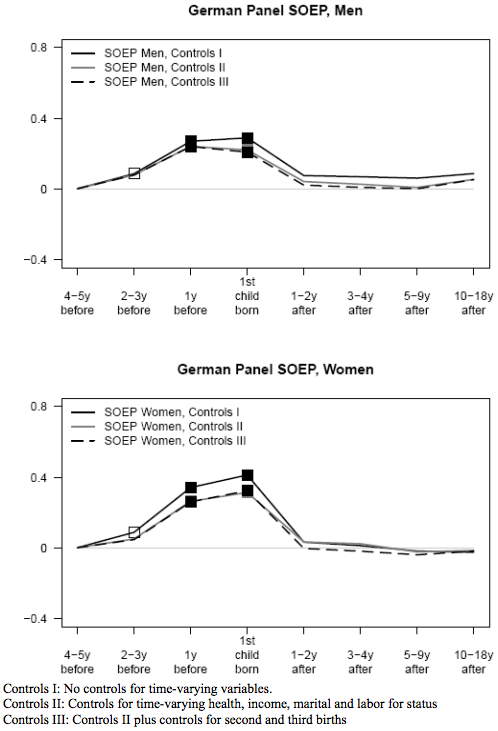 By birth order, German (SOEP) only 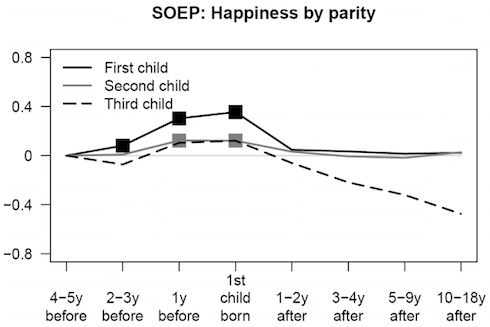 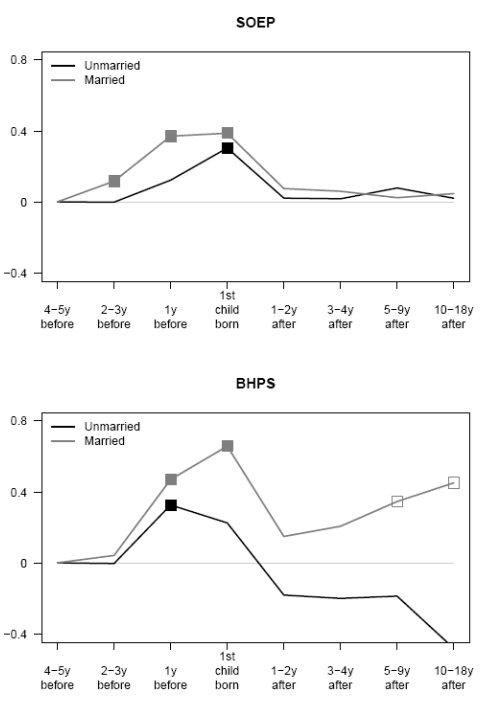 I think the most straightforward interpretation of these charts is that having children doesn't have much of an effect on your happiness overall, but being about to have children does make you happier. Another intepretation, however, would be that people often decide to have kids when they're at a point where their life is together and they're quite happy, and then when the child is born they're less happy. Either way this and the finding that older parents are happier suggests (tongue in cheek) a strategy: keep planning to have kids 'very soon', putting it off month after month until you're in your early 30s.

With the finding that younger parents tend to be less happy, in addition to the explanation that older parents tend to have more resources I'm also curious whether younger parents are more likely to have children when they don't intend to. Given that only people deciding to have kids face this question, I'd rather exclude from the sample all people who didn't make the choice. Unfortunately I don't think "was your first child an accident?" is a standard survey question.

Another issue is that because older people tend to report that they are happier, independent of children, I'd really like to see what these charts look like if you include non-parents. You'd show on each chart a line representing the happiness of an age-matched sample of non-parents from the same study. Without that I'm somewhat skeptical of the age-happiness pattern of the first chart.

There's also the question of how applicable results from Germany and Britain are to people making this choice in the US. In general the results from the German and British studies are close enough to each other, however, that I think they probably do generalize well to the US.

Update 2012-10-03: Another interpretation of these graphs would be that people tend to have kids 1-3 years after getting married and the happiness bump we're seeing is mostly that people really like the first few years of marriage. Not sure how to interpret the (differently shaped) happiness bumps in the "unmarried" case, though.

(Prompted by a discussion in which people were asserting that "there is a negative correlation between having kids and being happy" and "people usually think that having kids will make them happy, but studies show that this is a misconception".)

[2] This is a translation from the German. The wording of happiness-related questions can be important when comparing between studies, so don't read too much into these words.

[3] And if you did get some people to participate, I'd seriously worry about how representative they were of the general population.