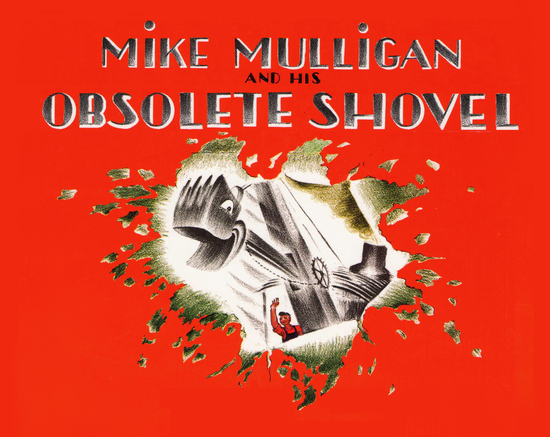 Mike Mulligan had a steam shovel. It was very powerful, but it was also very polluting. When it was new people were willing to take this tradeoff, but as more efficient earth moving machinery was developed cities started to ban coal-burning construction equipment. 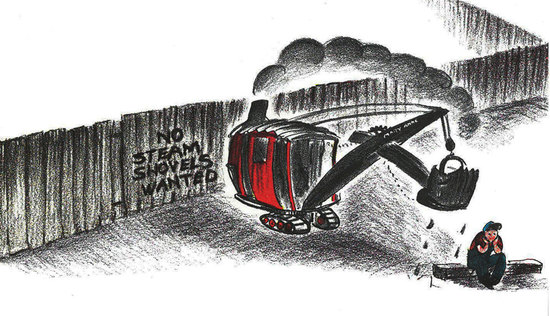 When he found the town of Popperville he felt right at home. The skies were blue, the grass was green, and a little coal smoke wouldn't hurt anyone. The town needed a new town hall, which needed a cellar, and they decided to hire Mike Mulligan to dig it. The little boy who watched all the town meetings heard this, and was worried: Digging with coal in the very center of the town? The little boy hurried down to where Mike Mulligan was finishing the first corner, neat and square, and told him to stop! Mike Mulligan just laughed and kept digging. 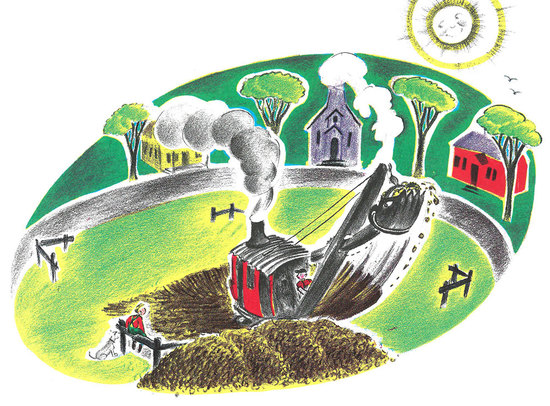 The little boy ran to the phone office and asked the girl who answers the telephone to put in a call to the Environmental Protection Agency and let them know what Mike Mulligan was doing. The EPA said they would come as soon as they could, but they didn't think they could be there before sundown.

The little boy hustled back to where Mike Mulligan was finishing the second corner, neat and square, and told him, "You better stop right now, Mister! The EPA will be here at sundown, and when they catch you illegally operating that steam shovel you'll be in for a large fine!" Mike Mulligan just shrugged and laughed again, "I've always said I can dig as much in a day as a hundred men can dig in a week. I'll have it finished by then, and your EPA will be none the wiser."

Mike Mulligan was having a good time digging. It wasn't easy work, but it was thrilling, throwing dirt and belching smoke, burning coal as fast as he could, trying to finish before the EPA arrived. He finished the third corner, neat and square, but the sun was nearly down.

He started digging even faster, glorying in the feeling of moving soil, the smell of the coal burning, and the roar of his wonderful steam engine. Dirt was flying everywhere and the smoke and steam were so thick that people could hardly see anything. But listen!

Then suddenly it was quiet. Slowly the dirt settled down. The smoke and steam cleared away, and there was the cellar all finished. Four corners ... neat and square, four walls ... straight down, and Mike Mulligan at the bottom with his steam shovel. 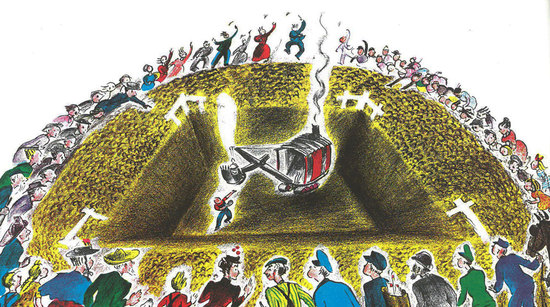 Suddenly the EPA truck arrived. The little boy shouted, "you won't get away with this! The EPA is here, and they're going to make you pay!"

The rest of the townspeople, however, were glad to have their cellar dug and didn't much like big government regulations anyway. They all swore to the regulator that they hadn't seen any steam-digging or law-breaking.

"Then what is that steam shovel doing at the bottom of your new cellar?" the regulator asked.

Then a little girl who had been keeping quiet reading the Coal Burning Elimination Act spoke up with an idea: "why couldn't we have chosen to put the steam shovel in the cellar as the furnace for the new town hall? The ban specifically exempts furnaces in government buildings."

Everyone thought this was a wonderful loophole, and they told the regulator that this is why there was a steam shovel sitting at the bottom of the freshly dug cellar. The regulator was skeptical, but decided there was ultimately nothing they could do, and went back to Washington. The little boy was punished for stirring up trouble, and the townspeople enjoyed their nice warm town hall, and warming earth. 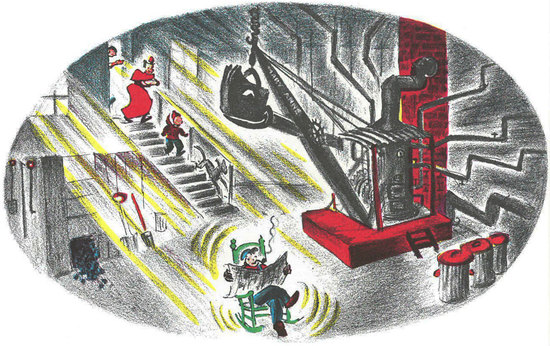