When the baby is crying and you have a bottle of expressed breast milk sitting in the fridge, you really want to get it up to human body temperature quickly. Usually when we want to heat food quickly we use a microwave, so that would seem to make sense. Except the CDC recommends that you "avoid using a microwave oven to thaw or heat bottles of breast milk" and cites the American Academy of Pediatrics:

Do not use microwave ovens to heat bottles, because they do not heat them evenly. Uneven heating can scald your baby or damage the milk. Bottles can also explode if left in the microwave too long. Excessive heat can destroy important proteins and vitamins in the milk.

This is the advice you see all over the net, but it doesn't make much sense. Milk is a liquid. If you swirl the milk after you take it out of the microwave you can quickly redistribute the heat, and I have a really hard time believing any "hot spots" would make it through to the baby's mouth. And why do they warn about exploding bottles, when this should be just as much a concern with microwaving anything else made from glass?

Part of what's going on is we're talking about heating much smaller quantities than usual, so it goes really quickly. Testing 2oz of with cold tap water in my microwave [1], each second brings the temperature up 4.2F: 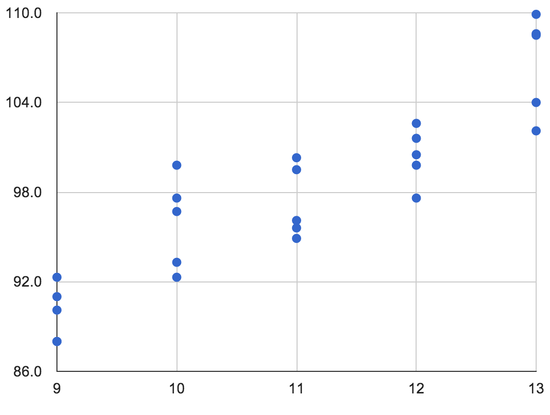 This makes it really easy to heat it more than you intend, especially when you consider that microwaves very widely in power.

But let's say you've measured your microwave to see how fast it heats so you know how many seconds is best to get fridge-temperature milk to about 98.6F, and you're careful to swirl the milk before using it. Then is it ok?

The other problem with uneven heating is that while you may end up with an average temperature of 96F some parts may have gotten substantially hotter. Unfortunately I can't figure out how to measure this. Ideally I'd have some kind of dye I could put in water that would permanently change color when it hit a given temperature, and then I could see how big this effect is. Another way to measure this would be to heat the milk and then test it for some property you care about, like bacterial resistance, but all the medical articles I can find doing this are for frozen milk. This means much longer in the microwave, likely more of an internal range of temperatures, and so is hard to apply to this situation.

We should be careful here, though, and not just assume other methods of warming bottles are fine. Running bottles under hot tap water or filling a bowl and letting them sit in it would be a temperature of about 135F (measured at our tap). Many bottle warmers use steam (212F), and even those that don't would take way longer to get the bottles to body temperature if they were only willing to go slightly above it.

I'm currently going with "put the (glass) bottle in the microwave until it's ~85F evenly through, and then put it in warm water for a bit to get it the rest of the way there". This seems like a good compromise, but is it the best I can do?

(One factor here is that if I take too long to get a warm bottle ready the baby will get too mad and not eat. But this probably varies a lot between kids, and if yours will wait then time matters less. It would also be nice to slowly lower the temperature down until fridge temps are ok, but right now I really just want to make feeding as easy as possible.)


[1] I used a CVS-branded electronic fever thermometer which claimed a range of 90F-110F. This is a narrow range, but it's the range we're interested in. I took five samples at each heating time, interleaving the times. For each I used cold tap water, and ran the bottle under the water for a while first so heat from one test wouldn't carry over. I think the temperature of cold water coming out of the tap went down by about 2F over the course of the test, which accounts for some of the variability between measurements at a given temperature. I swirled the bottles before testing.