What microphones sound good for what purposes? I have four different ones, but I didn't have a good sense of what the differences in their sound quality are or which ones I should use for which instruments. So I did a set of blind [1] tests to learn more about them. 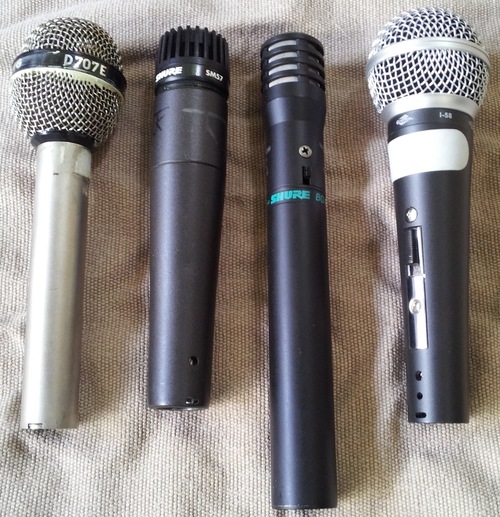 The bg4.1 is a condenser microphone while the other three are dynamic. I believe all four are cardioid pattern, but I'm not sure about the d707e. Left three are low end professional mics while the i58 is a cheap sm58 clone.

The main things I find myself micing are mandolin and voice (caller) because the other two people in my band don't need mics (fiddle with pickup, keyboard). So I decided to test three setups: mandolin chords, mandolin melody, and calling. [2] I recorded them, then before listening to any of them scrambled their names automatically so I wouldn't know which was which. I level-matched them with sox [4] and then listened to them, rating them and figuring out which ones I liked. I also got two other people [5] to rate them.

I'd encourage you to listen for yourself and rate; these are the samples in random order:

In retrospect this would have been a better test if I had eq'd each mic-instrument combination some: proximity effect is strong for some and the vocals especially could have done with less bass. I'm inclined to look for another mic to use for callers. I might start using the d707e for my mandolin instead of the sm57. I was surprised how well the i58 did: I had gotten it as a cheap spare.

[2] Recording: mic to phantom power box [3] to mixer to usb audio input to computer. Playback: computer to QSC K10. For calling the mic was very close (1/4") from my mouth, for mandolin it was pointed at around the 15th fret (the best spot in my earlier test, though this favors them sm57 because that's what I did that test with.). No eq on anything.

[3] Only the bg4.1 needed power but I wanted to keep this constant for all the tests because I was afraid its small amount of hum would unblind me otherwise.

[5] Thanks Rick and Danner!

←
When bands play confusing music Debate between 80,000 hours and a socialist
→