The MBTA publishes a transit feed primarily it can appear in google transit. The feed is publicly available, however, which means I can play with it. There is a lot of data, enough that I can't get GoogleTransitDataFeed to load it all to memory. I want to look more at gtdf and possibly use it in the future, but for now I'm just happy to read the csv files in the feed. I'm still thinking about how to display the data in interesting ways, but an easy first one is to show service frequency at each stop: 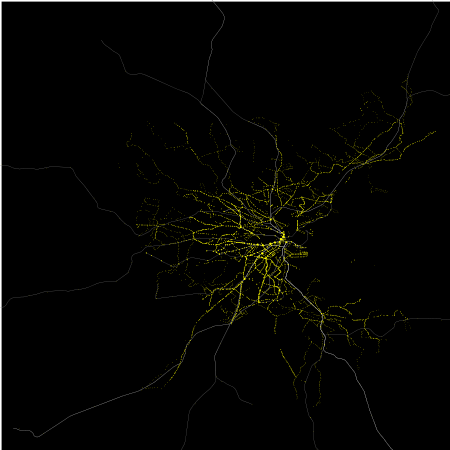 There is a really large svg (which I made with svgfig (I only used a tiny fraction of svgfig's capabilities, it's really powerful, especially for plotting graphs)) linked behind the png. It might be big enough to crash your browser.

The grey lines are the shapes the mbta publishes in shapes.txt. They appear to be the commuter rail and rapid transit lines, including the silver line. The yellow dots are all the stops in stops.txt with an area proportional to the number of times they're listed in stop_times.txt, which I think corresponds to their service frequency. For single pixel stops this does not hold because all stops visited at least once get at least one pixel. I've cropped the image to leave out the ten most distant stops in each direction. The map is projected by calling the gps coordinates screen coordinates (after translation and scaling) which probably introduces some distortion. I merged stops that were really close.