When the Free Raisins put out our studio album we signed up with CD Baby for digital distribution. They're very vague on how much you earn this way:

Every one of our digital music partners pays differently, but the average we pay out is 60 cents per song downloaded, $6.50 per full-album download, and fractions or whole cents per stream (when people listen to your song as if on a radio station, but don't download or buy it). Remember we pay you 91% of the total income from digital distribution, keeping only a 9% cut.
—CD Baby FAQ

Our album has now been up for about two years, so I thought I'd see what we're getting paid for streaming. [1] All numbers are how much we got; that's after CD Baby's 9% cut.

Spotify is by far the biggest of the streaming services for us: 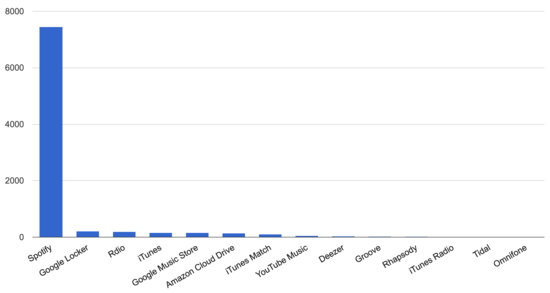 On the other hand, the best-paying platforms are the smaller ones:

I wanted to make sure that Groove wasn't an error here, so I looked at the details for those plays. Here's plays over time, with time on the x-axis, payment per play on the y-axis, and the size of the bubble indicating the number of plays: 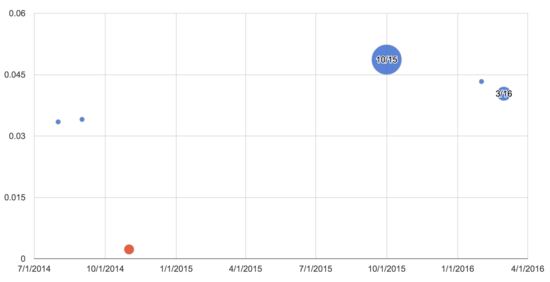 (I don't know what happened in November 2014 for that month to be much lower.)

So they really do pay ten times as much as Spotify per play. I think maybe what's happening here is that they don't have a free tier, which means they have much more money available per play?

How to evaluate this financially?

Plus, if people enjoyed listening to it, that counts for something.

←
BIDA board over time Gendered Partnering
→