One of the figures in contra dancing is the "gypsy". Two people walk around each other while maintaining eye contact. Where does it come from and why is it called that?

The simple answer is "it comes from English Country Dancing". While this is true, the figure being borrowed in the 70s, the question is then where did English dancing get it?

English country dancing in the 70s was a revived dance, pieced together by Cecil Sharp and others from old dance manuals. The dance manual that these folklorists relied most heavily on was The English Dancing Master, first published in 1651. This was written for an audience who already had some idea of how the dances were supposed to go, and so is generally terse and leaves a lot unspecified. To parse these descriptions into something people could dance, Sharp used surviving English village dances as a guide, made lots of adjustments, and occasionally seems to have just made things up to make the dances work.

Playford doesn't use the term "gypsy" at all, but does describe something that might have been what we call a gypsy: 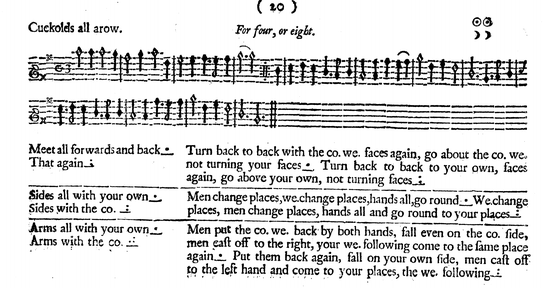 Sharp interpreted this section as a series of whole-gips, first facing outward and then facing centre; see the B part below: 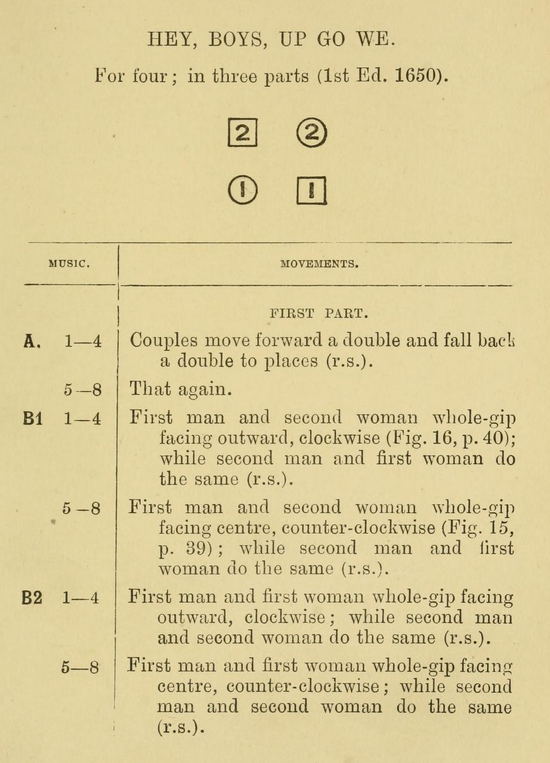 (You might notice Sharp has called this "Hey Boys Up Go We". It's not clear why; that's a different Playford dance (png) and not really anything like this one. This was observed in [1]: "Now Cockolds all awry appears in Playford as Cuckolds all arow, and Sharp prints it in The Country Dance Book under its alternative title of Hey, Boys, Up go we, the name of a partisan ballad with which the melody was later associated, and which was very popular with the Cavliers.") 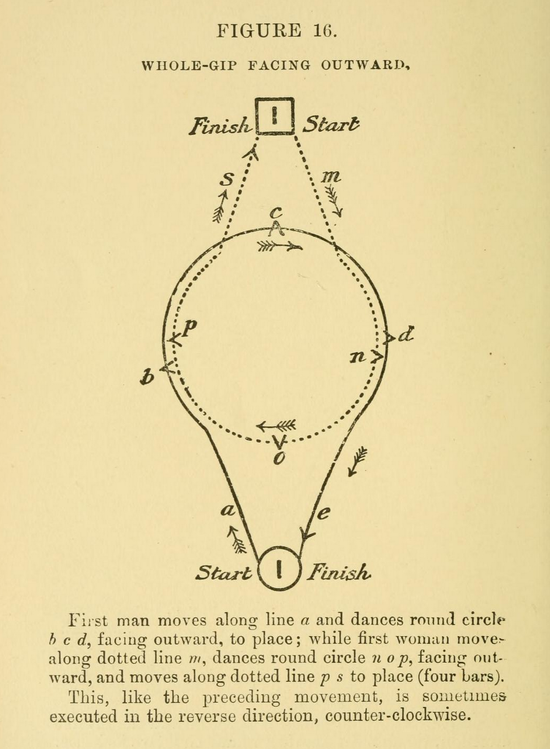 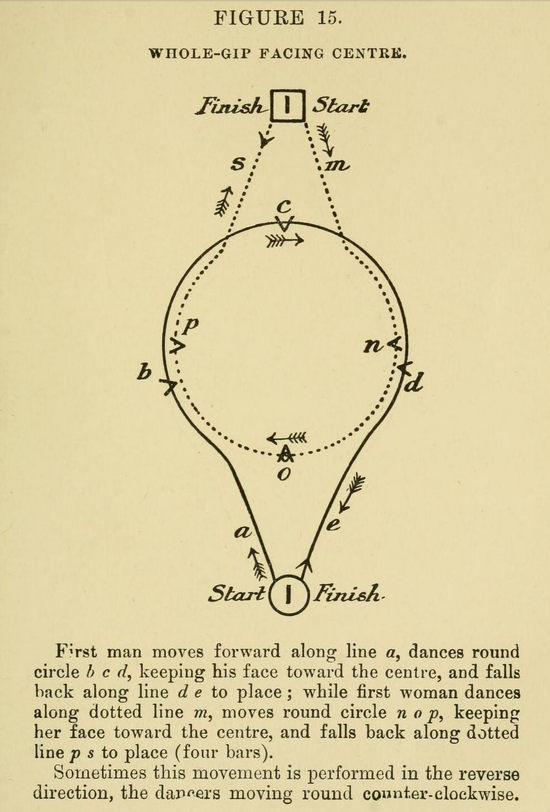 I'm not convinced Sharp's interpretation is much like what people were doing in 1650, but this use of "whole-gip" seems to be where the term "gypsy" comes into ECD.

Sharp seems to have taken the term from Morris dancing:

The figures which occur in the course of the dances described in "The Dancing Master" are very varied and very numerous. With the exception of the Set, the Side, and the Honour, and others of a like character, all of which are essentially Country dance figures, I have been able to connect nearly all of them with similar evolutions in the Morris or Sword dances. The Whole-Poussette and, of course, the Roll, are sword-dance figures, and I believe that all those Country Dance figures, in which an arch is made by the joining of hands, handkerchiefs, or ribbons, were originally derived from the same source. Other evolutions such as Whole-Gip, Back-to-Back, Cross-over, Foot-up, Corners, etc., are familiar Morris figures.
— The Country Dance Book Part II [2]

We're back one more step, to Morris dancing, but where does the Morris use of "whole-gip" come from?

Morris, like ECD, also went through a revival process, but unlike ECD there were no manuals. Instead people were collecting dances from people who remembered dancing Morris decades earlier. So it seems likely that "whole-gip" is the term they were using, and if they'd been using a different term Sharp and others would have used it instead.

Which leaves us a little way along, but not really much farther than we started. We're back to "some people called the figure that" without knowing who or why.

Update 2015-10-28: Colin Hume has also written about the origin of the term "gipsy". He links to two pages of Sharp's 1909 notes, for the Morris dances Bonny Green Garters and Flowers of Edinborough, where Sharp writes "Gipsies" instead of "Whole-gip," suggesting that this is what Sharp heard the dancers call the figure.