I've been thinking about more efficient refridgerators. I see two main issues with the standard fridge design. First, the heat from a typical fridge is dumped out the back, generally into a small space. This is inefficient. Second, the door is on the front instead of the top, so you lose a lot of your cold air when you open it.

I didn't find anyone online talking about how they had run their fridge's coils outside to get better airflow and reduce the temperature gradient. This would be especially efficient in the winter, but even in the summer the increased ventilation would help. The downside is that the fridge then is not moveable without detatching and moving tubing. But for houses or apartments where people were not expected tobe moving their fridges much, it could make a lot of sense. A simpler system could involve running heat conductive metal outside or even putting an open tube (with a valve that closed when it was too warm out, and a filter and grate to keep bugs and animals out) straight into the back of the fridge. Hmm.

Putting access to a fridge on the top does appear to have some acceptance already. This makes lots of sense, but it takes up more space. See this chest fridge (pdf) for an example. It uses about 1/10th the electricity of a new conventional fridge (~30KWh/ year instead of ~400). So how to make it take less space? One option would be to revise the fridge to be a pair of under the counter appliances, on the model of a dishwasher. (A pair because each one would then be half the size of a normal fridge.) They would slide out (The front, sides, and bottom would all slide out, as opposed to a dishwasher design where the door folds down and the racks slide out) with a second slidy bit like the upper rack on a dishwasher. The engineering question, then would be how to support the fridge and its contents when it was slid out.

Update 9/8: Thinking more about this, why not design each under-counter component like a dresser? Each drawer would pull out separately and keep cold air from falling out. You would need to design the drawers carfully so opening the bottom drawer didn't let all the cold from the top out. Something like:

This led me to look for "refrigerator drawers". And apparently these exist, but they're really crummy. Consumer reports says:

But you'll pay dearly for those limited benefits. The tested models cost an average of $2,500 (prices range from $1,800 to $3,200) for what we measured as only about 4 cubic feet of usable fridge capacity (none of the models has a freezer). What's more, while fridge drawers cost little to run (about $32 to $42 a year), they're far less energy-efficient than any type of full-sized refrigerator in our Ratings.

Looking at the pictures, they're designed to be stylish, but not to keep cold air in. For example in the picture below, the sides don't go all the way up: 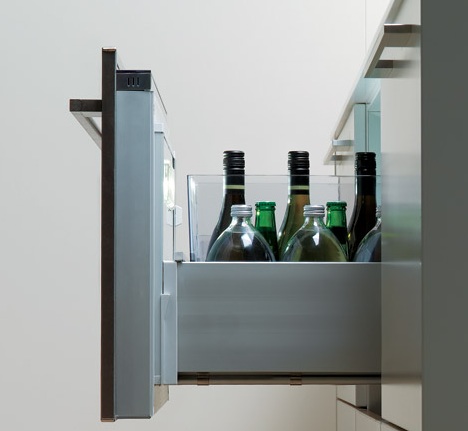 It also looks like at least some models have open bottoms: 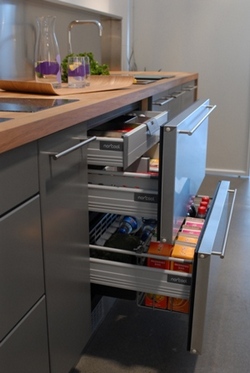 There are expensive commercial ones that don't, though, so this should be fixable:

Another problem with the drawer models out there appears to be size. A traditional fridge appears to have a volume of around 14 cubic feet, where some of that is the freezer. Models I'm seeing for drawer fridges don't appear to give more that 10 to 12 cubic feet for a side by side pair. So you lose two cubic feet.
←
List reply in mutt Trust me; I'm trustworthy
→