In a discussion on attractiveness I wanted to know how much of facial attraction is biological versus social. I found a lot of popular science articles talking about a 2002 study, Chickens Prefer Beautiful Humans, where they found chickens "showed preferences for faces consistent with human sexual preferences": 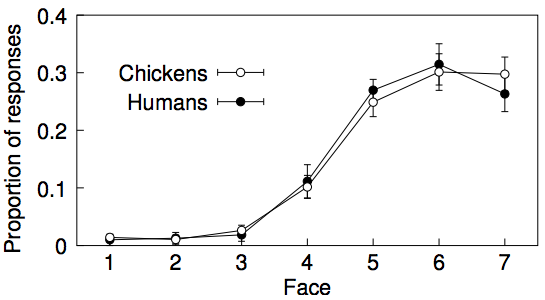 Their interpretation is that this "suggests that human preferences arise from general properties of nervous systems." Except there's a simpler and less interesting explanation.

They started with 70 pictures of faces. They averaged within each gender to get an average male face and an average female one. They trained six chickens to peck at pictures of the opposite-gender face and not at the same gender one, and the chickens were able to learn this distinction.

Then they manipulated these pictures to create a continuum from hyper-male to hyper-female. The average faces were put at positions 3 and 5 on the continuum, face 4 was an average of the two averages, and the remaining faces they "obtained by graphical manipulation (linear extrapolation based on pixel patterns) two faces showing exaggerated female traits [places 6 and 7] and two faces showing exaggerated male traits [places 1 and 2]". The overall sequence looked like:

Then they tested these faces with both chickens and humans. With chickens they measured pecking behavior, and found that chickens trained to peck at the average face of gender A pecked most at the hyper-A faces. For humans they got 14 university students to look at the pictures in random order and asked them to rate how much they would like to go on a date with someone possessing each of these faces. They found that students of gender A most preferred the hyper-B faces. That's what gives us the graph I included above.

So both chickens and humans prefer the same faces, doesn't that mean face preference is mostly genetic? Thing is, there's a much simpler explanation: the chickens have been taught prefer A to B, which as a side effect teaches them to prefer a linear extrapolation of A away from B. I would expect this to hold for most As and Bs, and there's nothing special about male or female faces.

If you want to test how much of face preference is shared with chickens, you need to design your experiment so you're not just testing the power of chickens to extrapolate.

(So how would I do the test? I'd get a large set of faces and randomly divide it into training and test sets. Using the training set I'd see if I could train chickens to peck at gender A and refrain from pecking gender B. It's possible they wouldn't be able to learn this, which would be some evidence that they don't process faces like people do, but let's say they do learn the distinction. I'd give them pictures from the test set in random order and measure how much they pecked in response to each. To compare this with humans I'd run the training set by people to measure their orientation, and not include people without a strong preference one way or the other. Then I'd have them go through the test set, and rank how attractive they found each face, perhaps with the same "would you like to go on a date" question. If the chicken preferences on the test set agreed with the human preferences, then I would agree that face evaluation was likely to be mostly biological.)

←
To hear others as they hear themselves Stressful Calling
→