Two months ago I wrote about how we had recently switched to a new method of putting our then five-month-old to sleep. Instead of comforting her until she fell asleep we would comfort her only until she stopped crying, after which she would start crying again and we would resume comforting, repeating this cycle until she fell asleep. This was an improvement—she slept in longer blocks at night than she had been—but she still would sometimes wake up on her own and need to be settled.

Two weeks ago we decided she was old enough to be falling asleep on her own, and we stopped comforting her to sleep. We would put her down in her crib, and let her cry until she fell asleep. If she cried for more than ~15 minutes we would double check her diaper, see if she was hungry, calm her down, and then put her back down. Hearing her cry was painful. Really painful. But she does need to learn how to fall asleep.

We did this for both night-time sleep and naps, and for the naps I tracked what time I put her down, when she fell asleep, and when she woke up. Some naps are missing if I forgot to write them down, and these are only her crib naps; if she napped on me in the sling or riding in the car I didn't include those. Here are all these naps, arranged from shortest time falling asleep to longest: 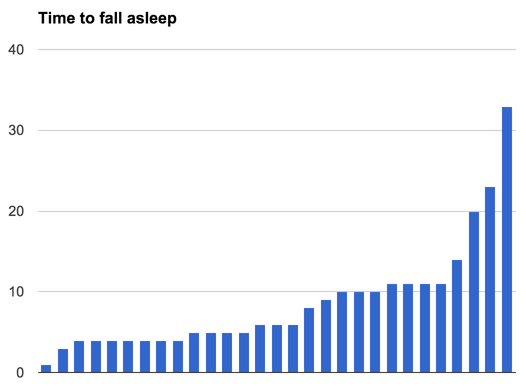 Her median time was 6 minutes, average was 8.6. The longest few times, however, don't represent continuous crying. Instead those are times when I put her down and she did a bunch of babbling and humming before falling asleep. She was probably not tired enough to go down these times, and over time I think I would get better at telling whether it's good to put her down yet.

One big change we noticed was that she started taking longer naps. When I had been comforting her to sleep she tended to nap for just 30-50 minutes but once we started letting her fall asleep on her own she would often sleep much longer. Here's her naps lined up from shortest to longest, blue for comforting and red for not: 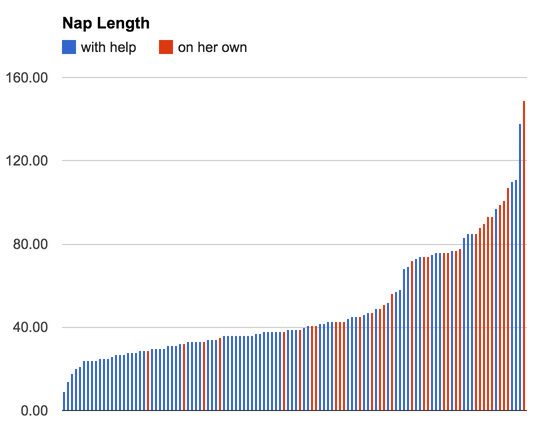 You can see almost all her short naps were from before, and most of her long naps were from after. [1] Qualitatively she also seemed less cranky during the day.

Still, we're not sure whether we'll keep with this. She's still crying for 5-10 minutes each time we put her down, and while the research is a mess this does seem like something that might not be good for her. (While she would still cry when we would comfort her to sleep, it wasn't as intense as when she's crying alone.) On the other hand, the longer naps do seem like something that would be good for her. And then there's the hard-to-consider factor that comforting her can be tiring and frustrating, especially in the middle of the night, so it's physically really nice not to need to do that. But how to weigh these I'm really not sure.

(It also doesn't seep to work well when the situation changes: this weekend we were spending time with relatives and she just wouldn't fall asleep in the crib there, even with comforting. And she's starting daycare soon when I go off paternity leave, where I'm not sure how they'll do naps.)

Update 2016-10-16: I wanted to pull this graph out from the comments, that I think is especially helpful. It compares the length of sleep at naps before and after the changes: 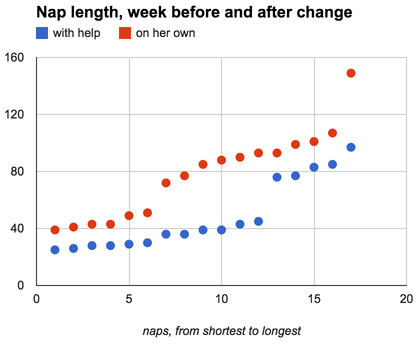 [1] Running a two-tailed t-test I got a p-value of 0.00025 which seems extreme enough that I'm really not sure I did the test right. The raw data is here.