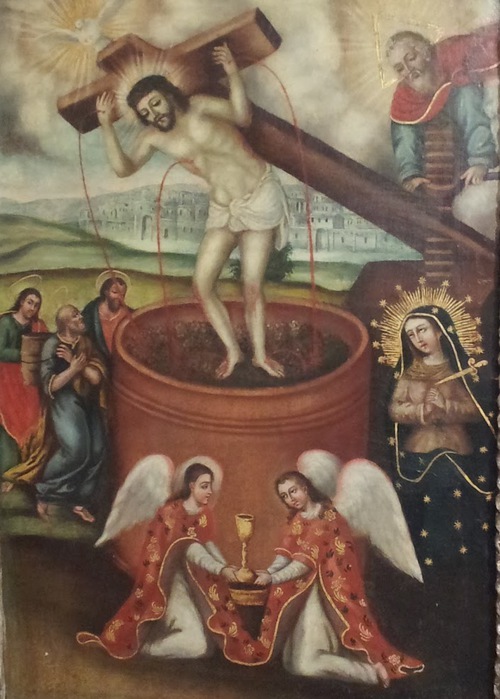 Apparently communion wine is made by a machine involving a lever to lift Jesus up and down to squish grapes. Something seems unsanitary about the open wounds, but it's all going to be His blood later anyway. 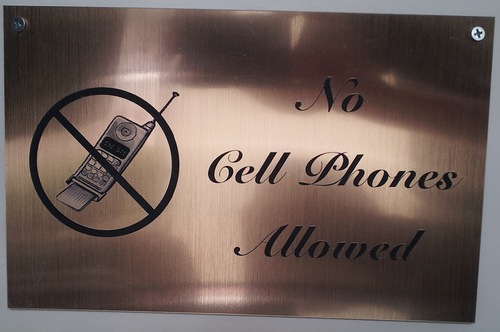 Cell phones haven't looked like this for decades, but this is on the wall at my former dentist's. I guess once you get a nice shiny sign you don't want to replace it every few years as people get new designs. I wonder how long we'll have the current iphone-style glass rectangle look?

Airport sign in Bogota. Not sure if it's broken or being misused.

I love my incredibow (though their web designer doesn't have the best taste), and I especially like how durable it is. I can play as aggressively as I want and not break any bow hairs. Except I managed to break a hair the other day, after almost a year of playing. And all this time I'd been bragging about it's indestructible nature! 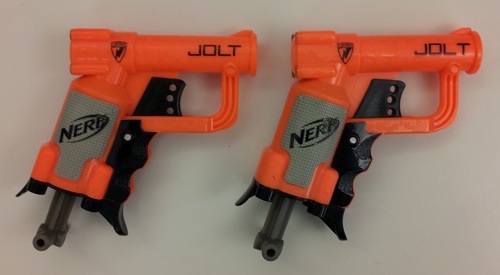 This picture is backwards: the original design is on the right, the revised design is on the left. After I complained to my co-workers about the kerning between the "L" and "T" NERF fixed it. (I also really like this style of gun. There are lots of large dart guns designed for maximum darts-per-second, but when you're actually having fun with them that just ruins the ratio of time between "shooting" (fun) and "cleaning up" (less fun). With these small guns you shoot slowly but since they're very accurate you spend longer lining up your shot. A much better ratio.) 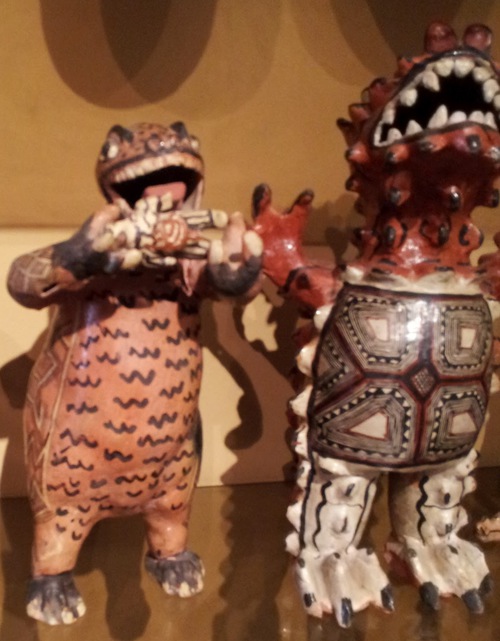 Wooden monsters in a museum of indigenous culture in Ecuador. The monster on the left is eating a person. 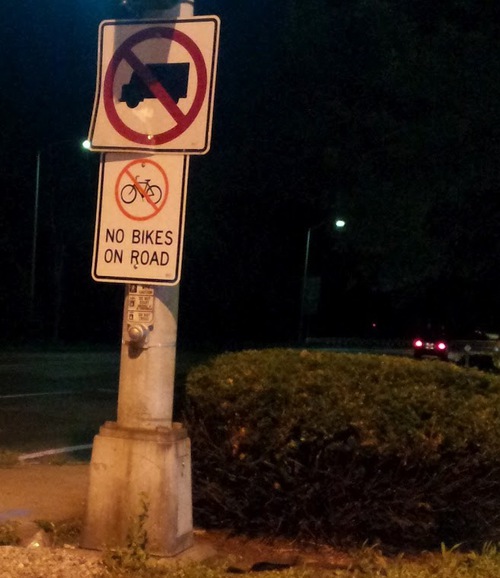 Route 16 has gained signs prohibiting bikes. I believe this is illegal, unless it's secretly an "express state highway":

Every person operating a bicycle upon a way, as defined in section one of chapter ninety, shall have the right to use all public ways in the commonwealth except limited access or express state highways where signs specifically prohibiting bicycles have been posted ... (MGL 85.11b.)

Not that Route 16 is a good road for bicycling on. When I commuted on bike between West Medford and BBN I would take parallel roads to avoid it. It's definitely a road where if you were to bike on it you would want to take the lane. 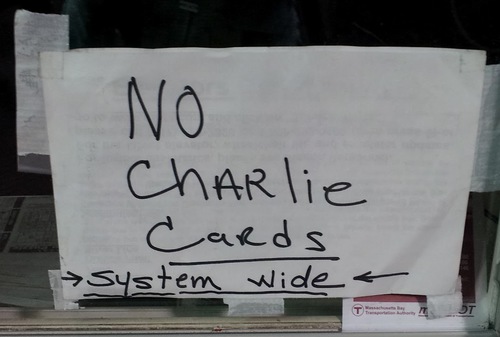 The MBTA has been out of Charlie Cards for a couple months now. You can still buy single-use "Charlie Tickets" from the vending machines, but you can't get the permanent plastic RFID ones. As the cards have built-in expiration dates, and the oldest ones are starting to expire, this is bad.

Yesterday we walked out to Butler Point in Marion, and saw these remains of something. Some looking and it turns out to be the remains of a Panama gun mount from World War II, part of Battery 155. On satellite view you can see another one to the left.

Looking out over the ocean from the same spot as above. The lighthouse is Bird Island Light.

This row of depositories is in MIT building 66 (where our lesswrong meetup is). You can't see it in the picture, but each of these is a bin with a hole on top, for putting in the right sort of thing. I don't know why people thought paper recycling and US mail were the same type of object. 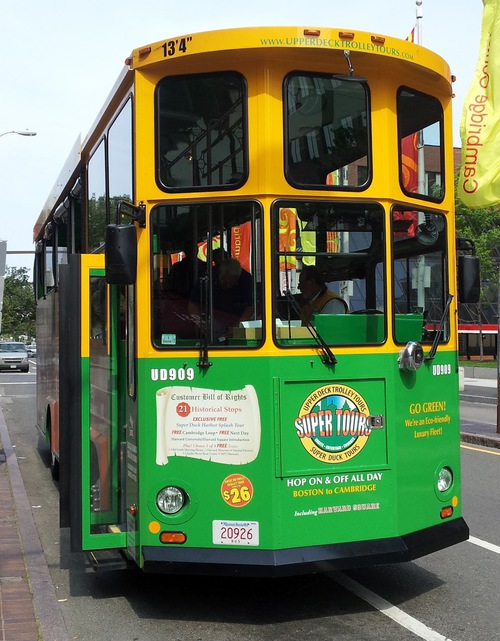 When did people get the idea that local tour buses, especially historically-themed ones, should look like trolley cars and go "ding ding"? 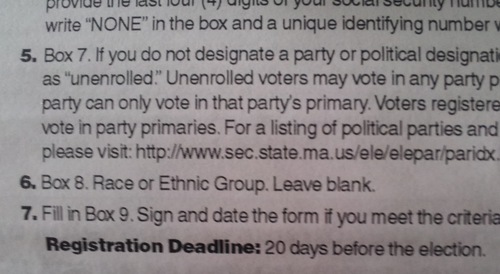 I received a voter registration card in the mail a few months ago. For box eight the instructions were: "Race of Ethnic Group. Leave Blank." 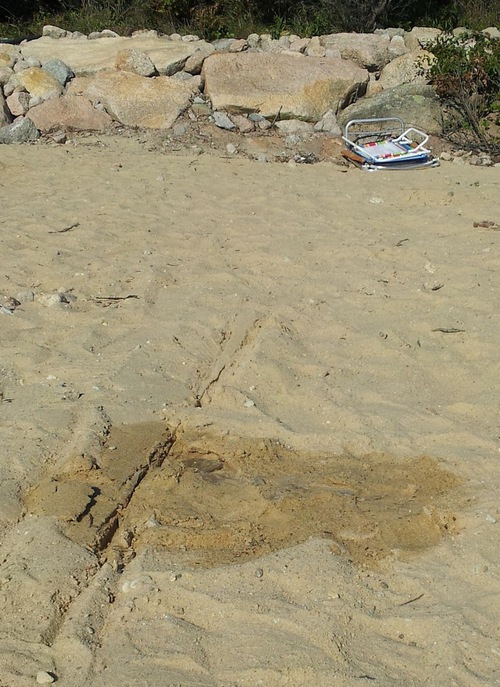 My parents have a smail sailboat that we brought to the ocean with us this weekend. It has a slow leak, but as long as you drain it after each time you take it out, it does fine. After about four hours in the water on Saturday we carried it up the beach, opened the plug, and let it drain. Twenty four hours later, with good sun when it wasn't dark out, the patch of sand we'd drained it on was still visibly damp. 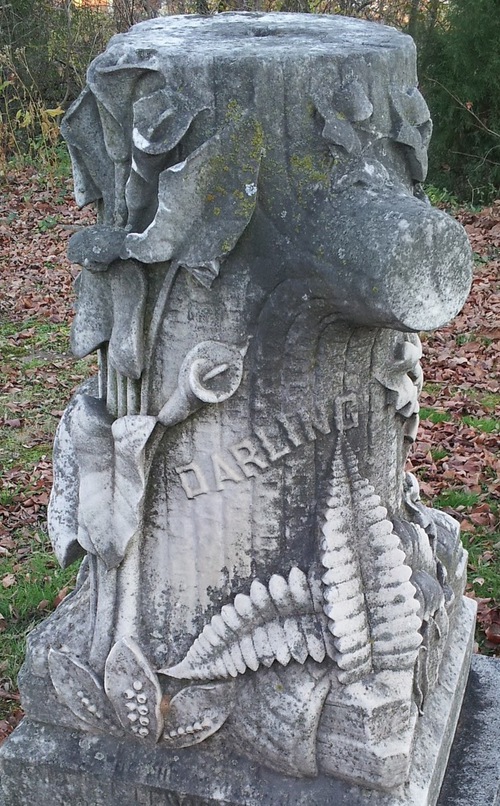 Visiting Julia's family in Richmond for Thanksgiving we went for a walk in Hollywood Cemetery. In three well separated parts of the graveyard I found headstones carved to look like tree stumps. Looking at the dates of death now, they're from 1882, 1883, and 1884. I wonder if there was a brief fad for these? Did they mean anything?